HomeNewsCommunity Colleges in San Diego and Imperial Counties Are Responsible for $8.1 Billion in Local Spending Annually, According to New Analysis

Community Colleges in San Diego and Imperial Counties Are Responsible for $8.1 Billion in Local Spending Annually, According to New Analysis 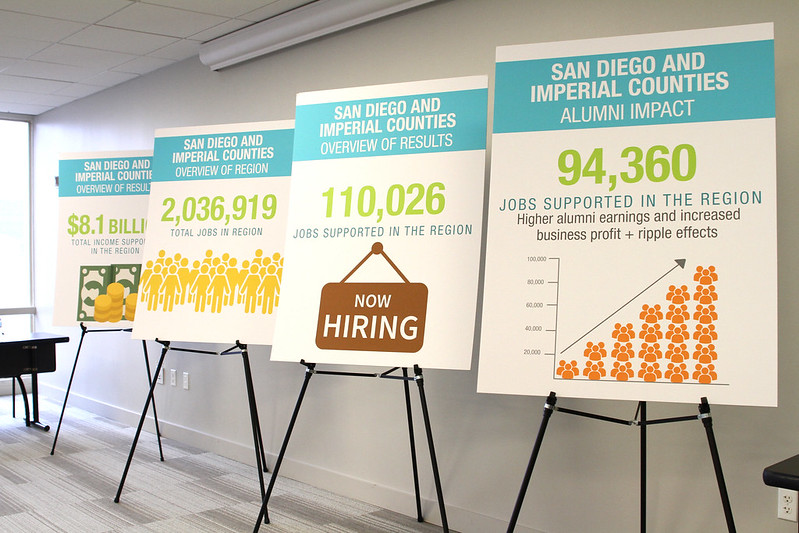 A new study (click for PDF) has found that the 10 community colleges in San Diego and Imperial counties contribute $8.1 billion annually in local spending, an amount that is enough to support more than 110,000 jobs.

“Community colleges in San Diego and Imperial counties help drive the regional economy, not only through an extensive offering of workforce development programs, but through operations spending and greatly increasing the earnings potential of our students,” said Sunita V. Cooke, superintendent /president of MiraCosta College and president of the San Diego & Imperial Counties Community Colleges Association (SDICCCA), which commissioned the study. “This report underscores that money invested in community colleges is guaranteed to yield big benefits to the future of our region.”

The study by Idaho-based Economic Modeling Specialists, Inc., (Emsi) analyzed spending by colleges on operations and payroll, the monetary benefits of a college education, and the savings to taxpayers through lower social service costs as the result of well-trained and employed alumni. It also factored in the so-called “multiplier effect,” which refers to the generation of jobs that occurs when employees, students and alumni spend their money on food, housing, and other expenses.

The analysis reviewed spending from 2014-15, the most recent year in which data was available. Among the highlights of the report:

SDICCCA serves almost 240,000 students in San Diego and Imperial counties. Besides the economic benefit through spending by the 10 SDICCCA colleges, SDICCCA works closely with the business communities in the region to offer specialized training and career technical education. California Community Colleges are the largest provider of workforce training in the nation, and Californians with a community college degree will earn $400,000 more in their lifetime than their peers who have only a high school diploma.

“The best decision I ever made was to go to a community college,” said Viry Martino, who transferred from Southwestern College to USC, where she earned her bachelor of science degree in civil engineering and her master of science degree in construction engineering and management. Now she’s a project engineer with Turner Construction Co., which helped build the Cross Border Xpress pedestrian bridge linking Otay Mesa with Tijuana International Airport. “It was a life-changing experience. Everybody is there to help you.”

Data and assumptions used in the Emsi study are based on a number of sources, including academic and financial reports from the districts, industry and employment figures from the U.S. Bureau of Labor Statistics and the U.S. Census Bureau, and a variety of studies and surveys relating education to social behavior.